This week our assignment was to:

I already had a prototype of my final project outputting images to a CRT TV, so that's what I'll be documenting here.

The board I'm going to be using is the ATtiny412 development board I made during the embedded programming week. It allows me to program the ATtiny via USB and has headers connected to the pins of the ATtiny to make connections easier.

The basic idea is to output a PAL TV signal from the development board to a CRT TV. PAL is an standard for transmitting analog video encoded into a single voltage signal. Because the signal is analog, we need to be able to output voltages other than ON or OFF, and thus we need a DAC (digital to analog converter). Luckily, the ATtiny has a built in DAC, which can output analog signals from the pin PA6. The basic workflow is as follows:

For the purpose of this assignment, I'm going to be using raw C with the avr-libc libraries. This is simply to make sure that I don't run into possible performance issues when trying to output the signal. I'm not going to go through how outputting to pins or other basic stuff works when using plaing C. I will however explain what I'm doing in each code segment.

Before writing to the DAC, we need to set what is called the reference voltage, i.e. the upper limit of voltage that gets outputted from DAC pin. For my purposes, I set this to 1.1V, because PAL operates between 0 and 1 volts, to my knowledge.

Next we need to enable DAC output by setting both the OUTEN and ENABLE bits of the DAC control register to 1. I've also cleared the DAC_DATA register before doing this. Not sure if it's strictly necessary, but it makes sure that we don't transmit any data that we might not want to.

Now we are ready to output analog signals via the DAC. Doing this is really simple, simply write

Now that we have the DAC running, we need to figure out what values we need to write there, and when. It's a good idea to chop the concept of displaying an image into smaller pieces, so I started by writing code that outputs a scanline and all the relevant syncing signals. This required me to check the PAL timings for a scanline:

Now that we have the horizontal blanking down, we can move to the active display period of the scanline, which lasts for 51.95µs. I wanted to output half black and half white for each scanline, so here's what my code for a scanline ended up looking like:

That should take care of printing an individual scanline. Now we need to add the vertical blanks used for separating frames. To simplify things, we aren't going to be interlacing, which is done by default in PAL. Instead we are going to write 304 scanlines and 8 scanlines worth of vertical blanking, resulting in 312 scanlines in total.

In addition to this, we need to do another vertical blank at the end of the frame, this time consisting of 6 short pulses:

Now that we have all the parts of a frame, we can output them:

Now that we have the code for displaying PAL video successfully uploaded to the microcontroller, it was time to test it. I was hesitant to plug it into a TV straight away, so instead I used an oscilloscope to see if the timings and the general appearance of the signal looked about correct. 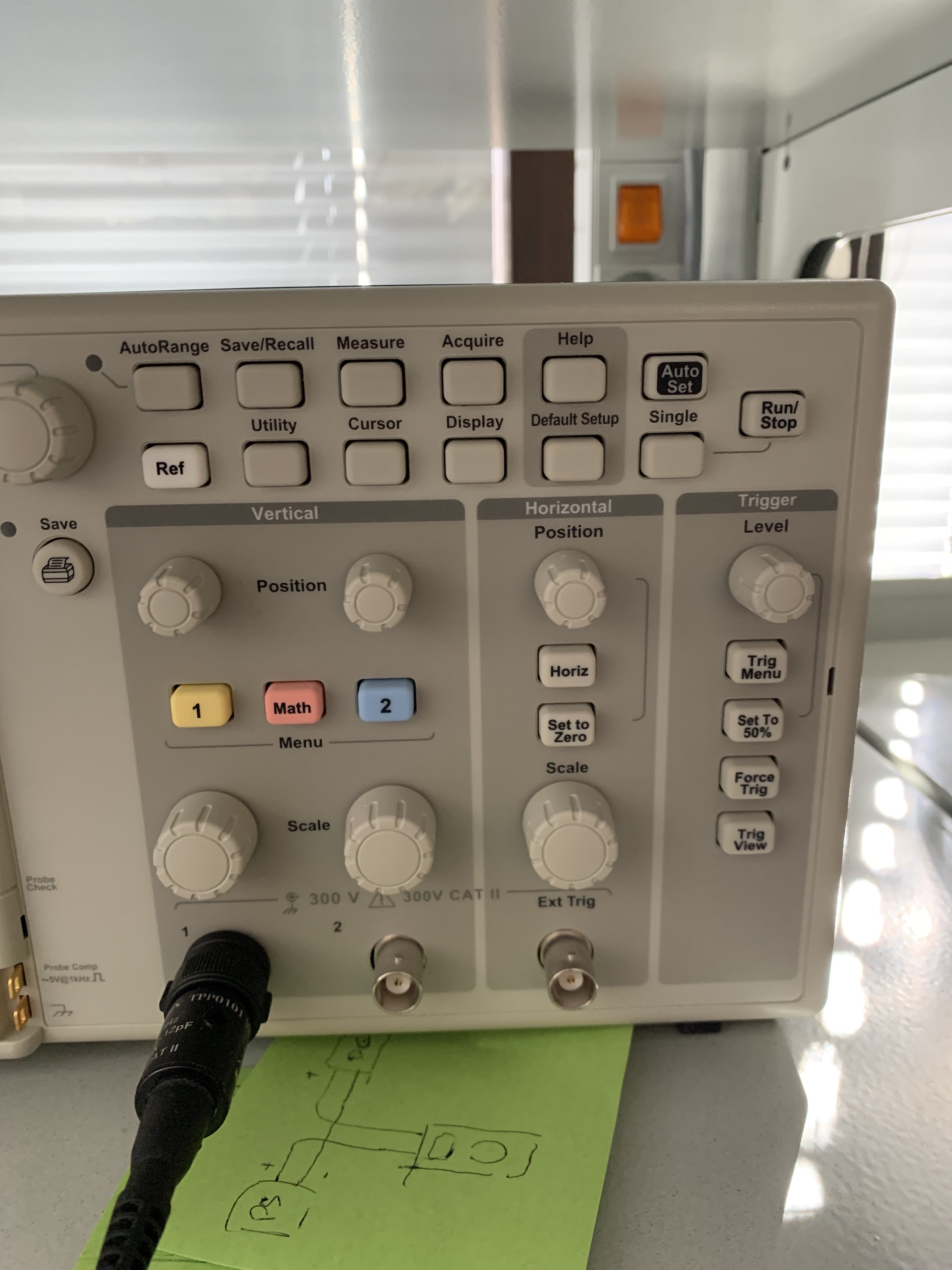 To use an oscilloscope, you adjust the vertical/horizontal position and scale using the knobs in the front panel. By scaling down to roughly the timescale and amplitude you're expecting can give you some idea if your signal is correct or not. However in my case, the timings of the pulses in the signal are so quick, that I needed a more accurate way to estimate timings of my signal. Enter cursors. 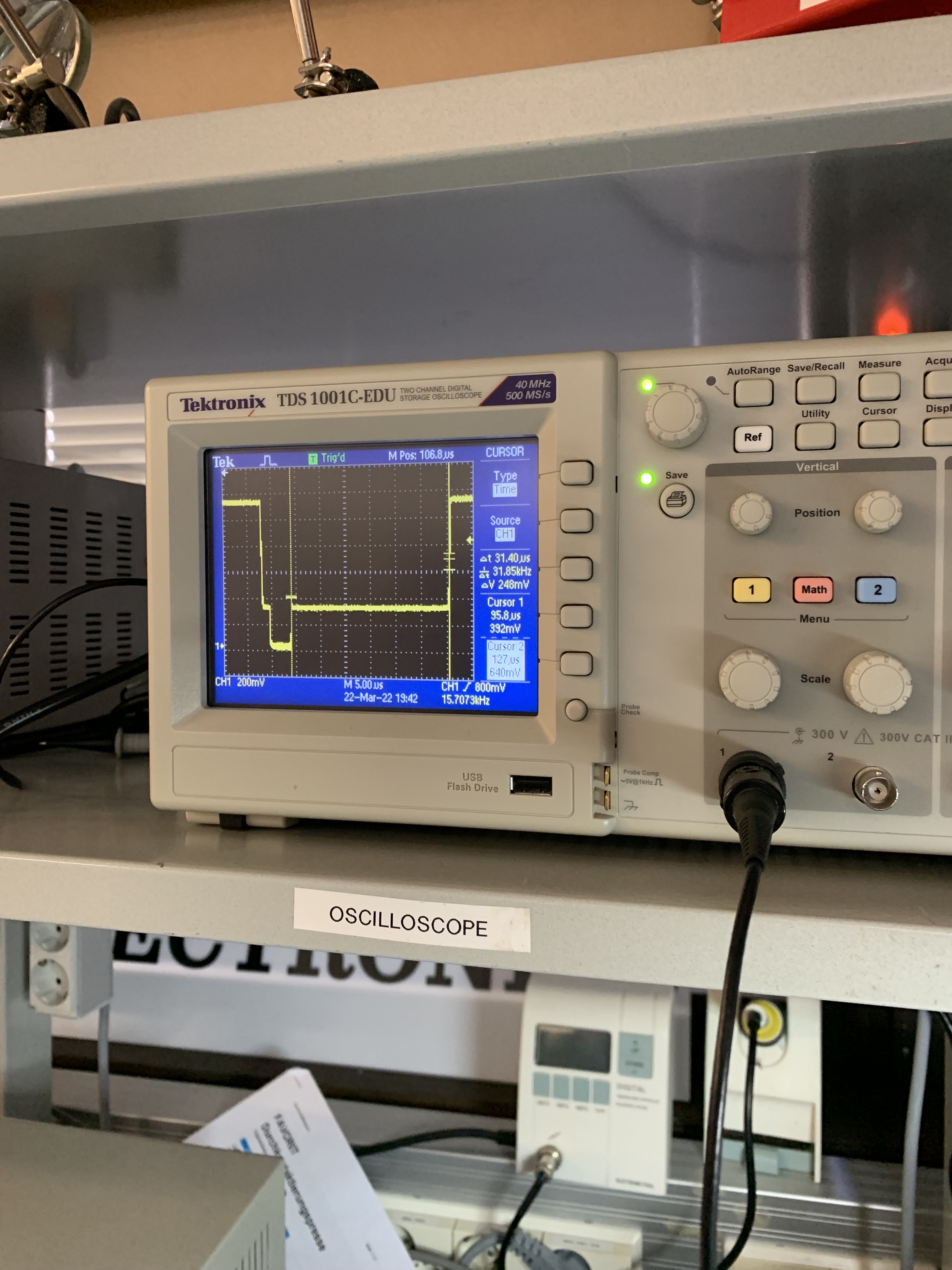 To place cursors on the waveform, you press the "Cursor" button on the oscilloscope. Then you can choose whether you want to place cursors horizontally (Type: Time) or vertically (Type: Amplitude). Then you highlight each cursor using it's respective button, after which you can move the cursor to it's desired position using the multipurpose knob. After the cursors have been placed, the oscilloscope will tell you the difference between the two cursors. Here you can see that I've placed cursors at the start and end of a scanline to verify that the length of the scanline is 64µs: 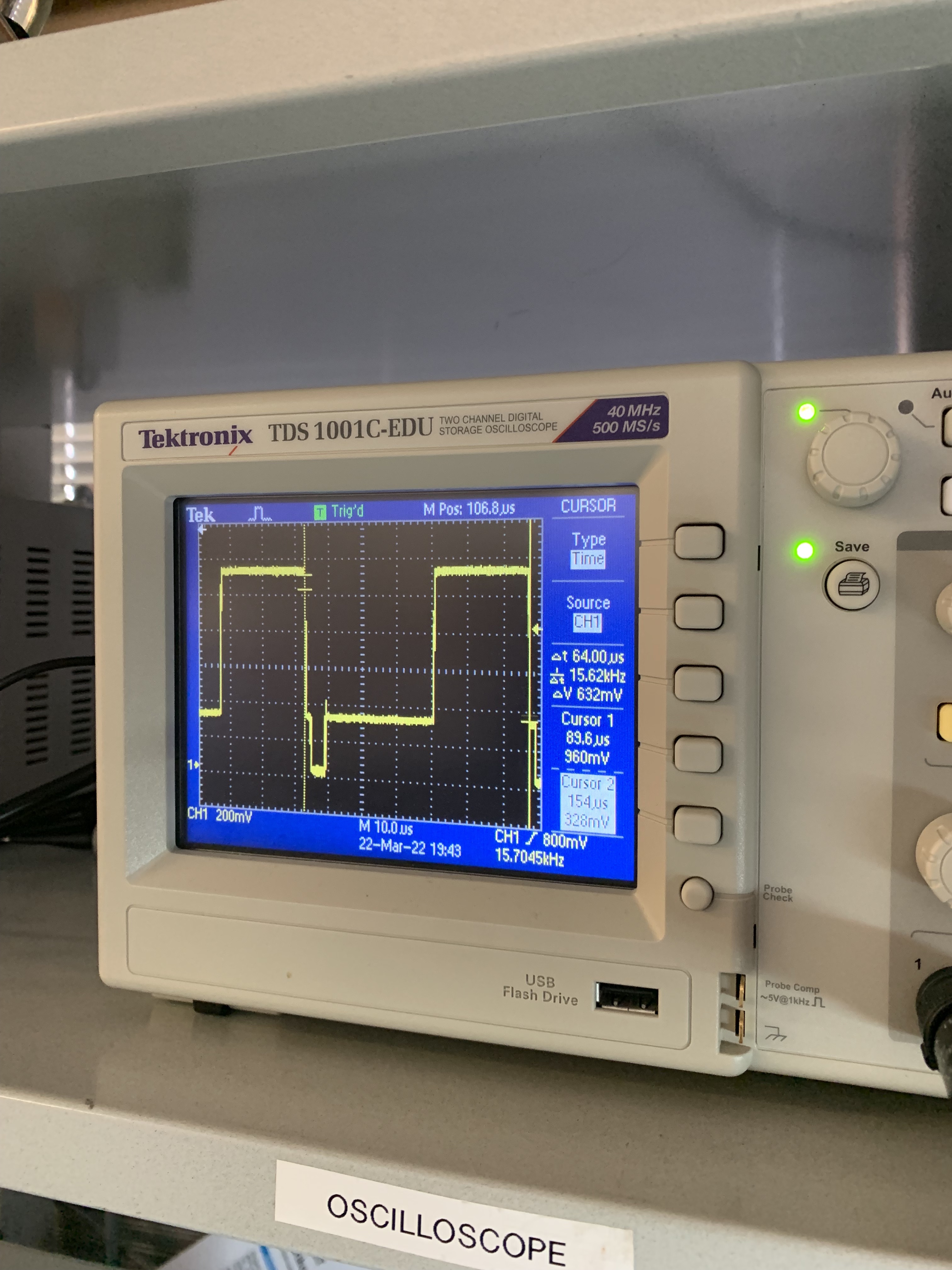 This helped immensely to verify that my sync pulses and whatnot were actually timed right, and made me feel a lot more confident about the whole thing.

One other neat feature in the Tektronix oscilloscope we have at the FabLab is the Video mode. This enabled me to view the waveform and move around it without it constantly moving in and out of view like would happen in the Edge measurement mode.

After testing with the oscilloscope, I plugged my board into a CRT TV and what do you know, I was getting a signal out!